Zen Master Ji Kwang (Roland Wöhrle-Chon) was born in 1960 in Germany. He studied Philosophy and Psychology in Bonn, Berlin and Madurai, India, where he had his first contact with yoga and meditation. Zen Master Ji Kwang has a Ph.D. in Psychology and works as a social scientist for the German Government. He is married and has two children. 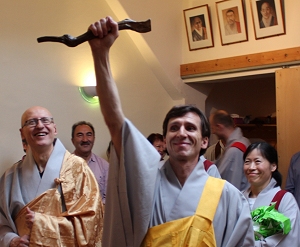